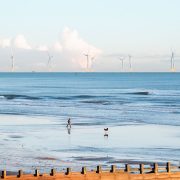 Aberdeen is widely regarded as the energy capital of Europe. It boasts the highest concentration of energy supply chain companies in the world, including around 75% of the global sub-sea engineering capability, and is home to half of Scotland’s energy sector jobs.

Aberdeen City Council has today approved a bold vision and strategic plan for the city to leverage that expertise, as well as its unique geographical, institutional and technology strengths, to become an exemplar in tackling the climate crisis.

The vision is for Aberdeen to become a climate positive city, at the same time helping to lead the world in the urgent shift to a net zero future by leveraging its unique assets and capabilities to support the global energy transition.

Prepared with the support of Hillbreak and Creative Concern, the prospectus is an ambitious and compelling response to the climate and energy transition imperatives. It positions Aberdeen as the primary destination for focused UK and international investment in alternative energy solutions and markets, particularly hydrogen, offshore wind and carbon capture and storage.

The prospectus calls for the city’s climate positive ambitions to be recognised, promoted and invested in as a national infrastructure and inclusive economic development priority. It advocates a decisive local partnership approach, underpinned by commitment from the UK and Scottish Governments, to unlock the unique potential of Aberdeen in contributing towards national net zero carbon and just transition goals, whilst also sharing its unrivalled depth of expertise with international partners to drive the global energy transition.

As well as spearheading the transition of global the energy sector, the prospectus also confirms Aberdeen’s aim to be a climate positive city as soon as possible. This means that greenhouse gas emissions related to the operation and continued development of the city – across all sectors – are verified as reaching beyond net zero, taking account of the emissions saved beyond the boundaries of the city through the export of zero carbon energy supplies, such as green hydrogen. Calculating a robust pathway to below zero emissions, aligned with an appropriate science-based methodology, is highlighted as an immediate priority.

The vision ­– and the framework of leadership and governance actions which underpin it ­– is as timely as it is ambitious. The coronavirus crisis has had a huge impact on people’s lives and on the economy. For Aberdeen and wider city region, it has had a particularly dramatic effect. The recent and profound fall in oil prices underlines the importance of showcasing the strengths of the whole city region economy, and in particular Aberdeen’s place in the vanguard of a future renewables revolution. Meanwhile, the concentration of climate-altering greenhouse gases in our atmosphere continues to break records. Ushering in a just energy transition is more critical now than it was even just a few months ago.

Aberdeen’s vision to become a climate positive city at the heart of the global energy transition is therefore pivotal to its prospects for realising a resilient recovery following the pandemic, as well as those of Scotland and the wider UK.

Jon Lovell, co-founder of Hillbreak and lead author of the prospectus, said: “the idea that we have a collective future in which we all have a stake and a part to play is uniquely resonant at this moment in time. Just as profound action on climate change requires political leadership, economic resolve, and individual action and agency, the notion that we are all in this together has added poignancy as we also respond to the enormous threats of the coronavirus crisis.

“There’s no question that the success of national efforts to transform to a net zero carbon economy, as part of a resilient recovery from the impacts of COVID-19, will be contingent on what happens in Aberdeen. Whilst working with the City Council and its partners in the public, private and academic sectors, I was struck by the strength and unity of opinion, not only about Aberdeen’s potential role in a national and international context, but of the vital importance of everyone working together towards a common vision and goal.”

That sentiment was echoed by Aberdeen City Council Co-Leader Jenny Laing. Commenting on the launch of the plan, she said: “Green recovery will be a big part of how the Aberdeen economy responds to Covid-19 and the Net Zero Vision already builds on the plans we have in the Local Outcome Improvement Plan.

“Aberdeen is a world-leader in energy technologies providing a major economic stream locally and nationally while already embracing the global energy transition. We have an enviable track record of leading on deploying climate friendly actions including the EOWDC and H2 Aberdeen, and now in working collectively on leading the transition to net zero activities.

“This provides an opportunity for the city to become an exemplar in the energy transition towards net zero and lead the way in how to change in a dynamic and thoughtful way. It also aligns to the work of World Energy Cities Partnership and its work around climate change.

“We look forward to the future and working with public and private sector partner organisations and companies to achieve net zero together.”

You can read Aberdeen’s vision to be a climate-positive city at the heart of the global energy transition by clicking on the image below. 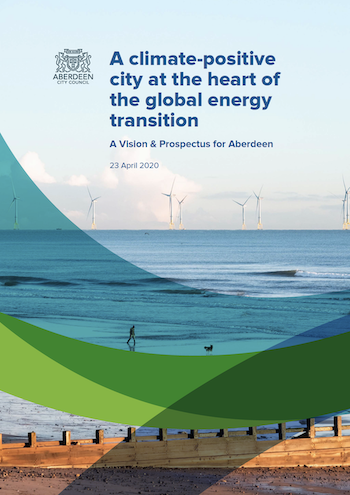